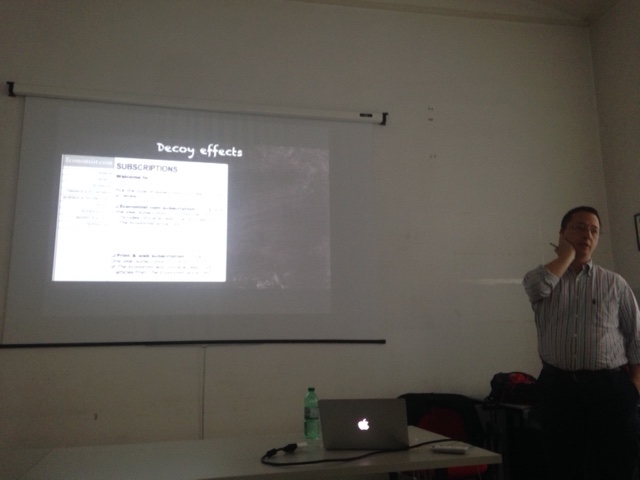 A decoy is an irrelevant option that, when added to a binary choice, is not selected but nonetheless alters the subjects’ preferences between the other two options, systematically biasing towards one of them (the target of the decoy). Since their first experimental observation (Huber, Payne, & Puto, 1982), the decoy effect has been considered an important anomaly of rational decision-making, albeit recently its applicability to real-life choice scenarios has been challenged (Shane, Lee, & Baskin, 2014; Yang & Lynn, 2014) and is now a matter of some debate (Huber, Payne, & Puto, 2014). In particular, decoys have been often studied in choices between outcomes occurring at different points in time, i.e. intertemporal choices (Kowal & Faulkner, 2016; Gluth, Hotaling, & Rieskamp, 2017), with mixed results: sometimes decoys are impactful, sometimes they are not, and in general they seem to be more effective in biasing towards larger-and-later (LL) outcomes, rather than towards sooner-and-smaller (SS) rewards. We suggest that this puzzling set of results is due to an underappreciation of two important influencing factors: time pressure (Pettibone, 2012) and immediacy / certainty (Weber & Chapman, 2005). Moreover, we argue that decoy effects constitute an excellent testbed to assess similarities and differences between intertemporal choice and risky decision-making, which constitutes another open issue of debate (for discussion, see Green & Myerson, 2004).

To support these claims, in this seminar we will present three studies, two already concluded and one in progress. In Study 1 (N=92), we demonstrate that asymmetrically dominated decoys influence both intertemporal choice and risky decision-making only in the absence of time pressure, since otherwise the comparative process required for the decoy to have an impact cannot occur, consistently with predictions made by connectionist models of decision (e.g., multialternative decision field theory, Roe, Busemeyer, & Townsend, 2001). In Study 2 (N=53), we show that, when the SS option is no longer presented as immediate / certain, the impact of decoys on intertemporal and risky choice becomes symmetrical – that is, they can prompt subject to become either more patient / daring or more impulsive / prudent, since the anomalous element of immediacy and certainty has been removed from the equation. In Study 3 (ongoing), we assess decoy effects in intertemporal and probabilistic choice using both gains (as in the previous two studies) and losses, to assess the interaction between sign effects and decoy effects in these domains.