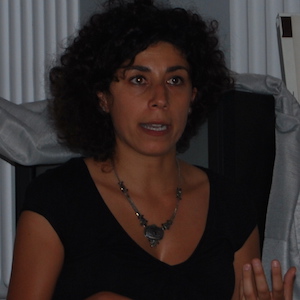 Francesca Giardini is Assistant Professor in Sociology at the University of Groningen, The Netherlands. She worked at the Laboratory of Agent Based Social Simulation (LABSS) until the beginning of 2016.

Her research focuses on the mechanisms supporting prosocial behaviors and she is especially interested in understanding how reputation can be used as a tool for governance in different organizational and institutional settings.

She applies an inter-disciplinary approach to investigate social emergent phenomena like gossip, reputation and opinion spreading. She has a background in cognitive psychology and uses laboratory experiments and agent-based simulation models with the aim of modeling the micro-macro relationship between individual motivations and collective outcomes.

After she obtained her PhD in Cognitive Science from the University of Siena in 2006, she was a post-doc at the Institute of Cognitive Sciences and Technologies (ISTC-CNR) in Rome, where she joined the Laboratory of Agent Based Social Simulation (LABSS).

From 2010 to 2012 she was a post-doc in the Department of Cognitive Science, Central European University in Budapest.